The Red Line Parkway is a planned linear park and public space along the Red Line Trail, extending 32+ miles from Downtown Austin to Leander. Our vision is a thriving, inclusive, multi-functional parkway that provides convenient, enjoyable, car-free access to transit, parks, public art, and other urban, suburban, and rural destinations.

Read about our name.

Read more about the board and staff

Learn more about our campaign to bring the Red Line Parkway to life! 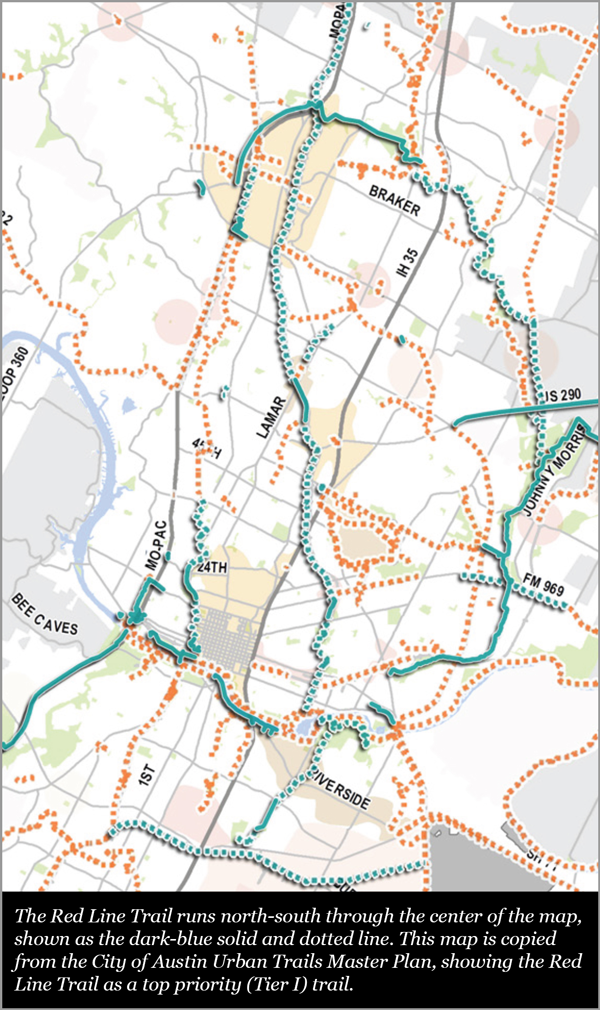 The Red Line Parkway is a planned linear park and public space along the Red Line Trail, extending 32+ miles from Downtown Austin to Leander. The Red Line Trail will follow (from south to north) the Capital Metro Red Line from Downtown Austin, to Boggy Creek in East Austin, to Highland, to Crestview, to the North MoPac Trail & the Northern Walnut Creek Trail, through Robinson Ranch, to Lakeline Station, to Brushy Creek Regional Trail, to the Bell District in Cedar Park, to Northline in Leander, and to the South Fork San Gabriel River. About half of the trail is identified as a top priority (Tier I) trail in the City of Austin Urban Trails Plan. Currently about 10-20% is completed or funded: Avery Ranch, Walnut Creek to Braker Lane, adjacent to Highland Mall, Boggy Creek Trail (part of EastLink Trail), and the Crosstown Bikeway (Lance Armstrong Bikeway). Community interest in a trail along the Red Line dates back at least to the early 1990's. In 2004, voters approved the MetroRail commuter line and right-of-way for the Red Line Trail along the rail line. (More maps)

Our vision for the Red Line Trail includes a paved surface, separate parallel trails for bicycling and pedestrian access where feasible, complete grade-separation from motorized street traffic (bridges and tunnels at streets), and gentle inclines of 1-2% grade. Tributary connections will provide additional access to the Butler Trail around Lady Bird Lake, Shoal Creek, Waller Creek (both downtown and near Highland Mall), the Northern and Southern Walnut Creek Trails (eventually creating a continuous 30-mile trail loop), Mueller, The Domain, Wells Branch, and UT Austin. The Red Line Trail will enhance existing trail assets, creating a central part of a continuous 200-mile trail network. Since the trail serves Central Austin, it will connect its population center to all existing and future trails extending into South Austin, suburban, and rural areas. Implementation of the Red Line Trail will raise the bar and build demand to increase investment in protected bike lanes, sidewalks, and active transportation accommodations in Austin.

How the trail can fit
within constrained urban space 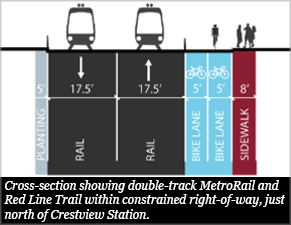 The existing MetroRail right-of-way provides enough width for both a double-track rail line and for the trail in all or nearly all of the corridor. Adjacent commercial sites, brownfield sites, other transportation rights-of-way, and other parcels offer opportunities for creating wider trail corridor segments.
We have developed several demonstrative cross-sections showing how the trail can fit within the corridor. These are based on varied conversations with industry experts and initial conversations with local government stakeholders. Further research, planning, engineering, outreach, and conversation will be conducted to determine more refined parkway corridor cross sections.

Our organization’s name, Red Line Parkway Initiative, has its origin in the name of the Capital Metro MetroRail Red Line approved by Austin-area voters in 2004 that the Red Line Parkway will follow. The City of Austin has been using the name "Red Line Trail" for over a decade, including in their 2014 Urban Trails Plan (e.g., on p. 3-24) on their website.

We added the term "Parkway" to emphasize and to create a vision that this corridor will not just be a strip of pavement, but will consist of trails, parks, and other public spaces to be enjoyed. In general, parkways originated as greenspace corridors for people to enjoy as they travel through them. While many such-named places are still enjoyable as park corridors, the term has over the decades been used more and more for large roadways that do not resemble parks.

The final term in our organization’s name, “Initiative,” recognizes that creating this corridor requires a special initiative in order to complete it. The concept and effort to create this corridor has existed for over 20 years, and the Red Line Trail was due to be completed in 2019. The project is in the purview of two of our largest local institutions, Capital Metro and the City of Austin, but despite that momentum, as of 2022, less than 20% of the trail has been completed.

We have learned that for some people, the term “Red Line” immediately evokes the racist practice of redlining, i.e. the systematic denial of home mortgages and services to people of color. From the beginning of our effort, a central part of our vision has been for the Red Line Parkway to be a place for all people to safely and comfortably enjoy, regardless of racial or ethnic background. Because of the concerns regarding the term “Red Line”, and that use of the term works counter to our goals of inclusion, our board officially committed in June 2020 to change the name of our project and organization. We will engage the public on a new name as part of the public Parkway Plan process beginning in 2022.